I’ve talked about the shrinking Cadbury Eggs before, but a lot of these are just plain tragic.   I happen to love Breyer’s  Frozen Dairy Dessert but I’ll never look at it the same way again.  And Cadbury LITERALLY cutting corners on us is shameful, especially in light of the shrinking egg thing.  As for candy bars, they can’t even call the big ones “King Size” any more because kings everywhere would sue them.   The other day I was looking at our checkout candy bar section, and there’s a tiny pouch (and by tiny, I mean 1.4 OUNCES, or enough to fit in the palm of your hand)  of Dove Chocolate Covered Fruit and the price was $2.69.   I know I’m getting old, but it wasn’t that long ago that $2.69 bought you more than a pound of candy, not 1/10th of a pound.  The bags were mostly expired so I guess the makers of Dove (M & M Mars) aren’t fooling very many people.  When asked about the shrinking Cadbury Egg (it actually used to be the size of a real egg, just look at them now!) Cadbury’s response was “We’re not shrinking, you’re getting larger.”   And apparently dumber. 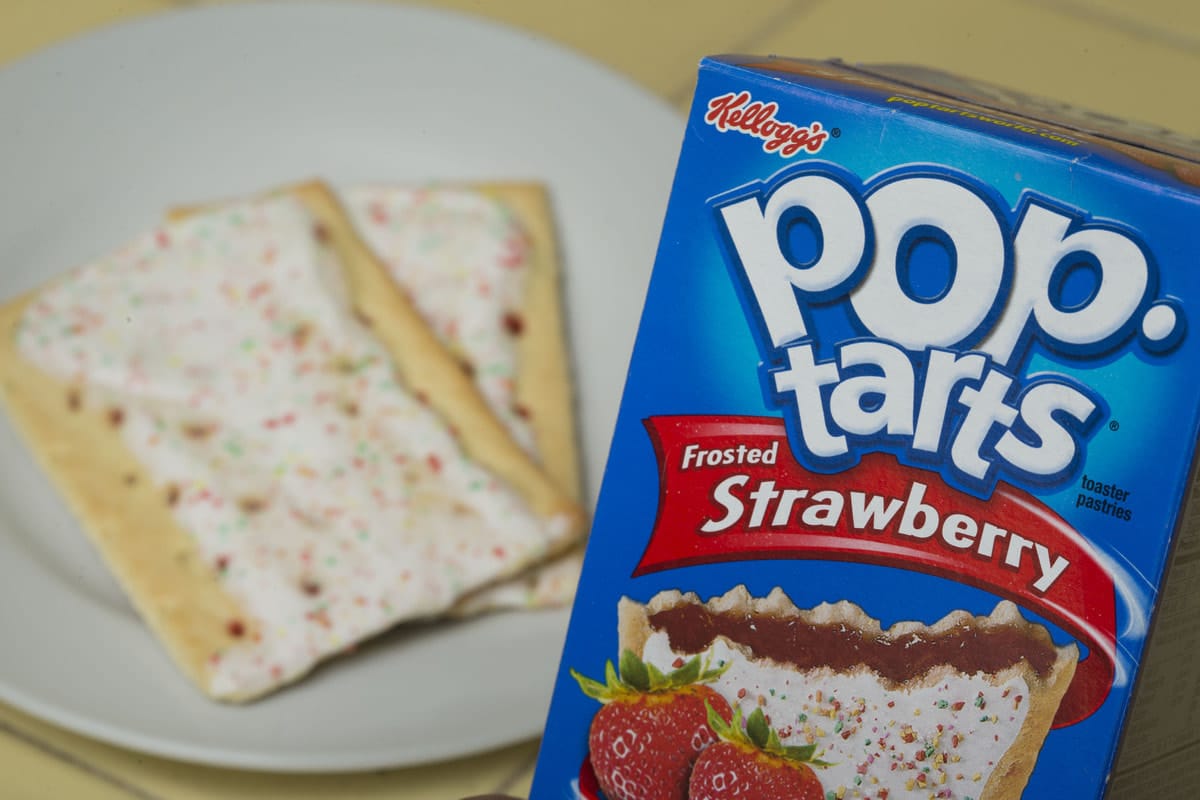 Did those toaster pastries not feel quite so magical the last time you bought a box? Maybe they didn’t live up to your memories from elementary school? Well, time for some harsh truth: The filling has changed.

Pop-Tarts used to be filled with Smucker’s Real Fruit. Today? Some generic filling. You’ve been warned. 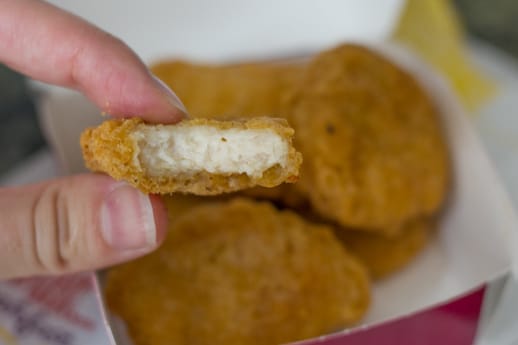 To be honest, Chicken McNuggets never tasted much like anything…well, except for my childhood. But they don’t even taste like that anymore, because in 2003, McDonald’s switched from a white/dark meat combo to all white-meat Nuggets. Guess they determined dark meat was the thing keeping these breaded and deep-fried chicken scraps from being considered healthy? 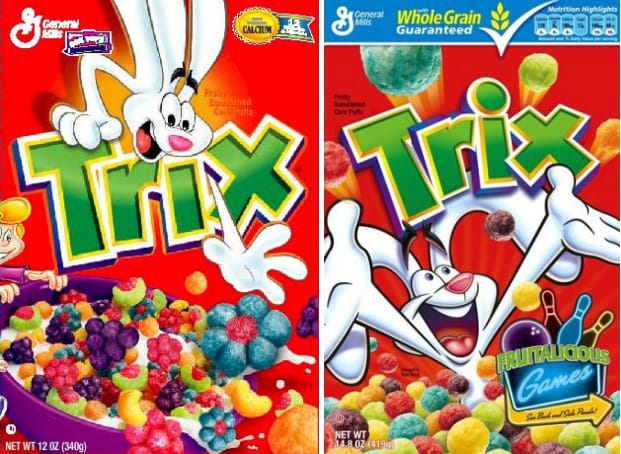 Yes, I understand that when Trix originally debuted in the ’50s or whatever the cereal was shaped like spheres, but I think we can all agree that the right change was made in the early ’90s to shape the pieces like fruit. Now, though, for some reason on grocery shelves we’re back to the stupid spheres. Do we as a culture never learn from our mistakes?! 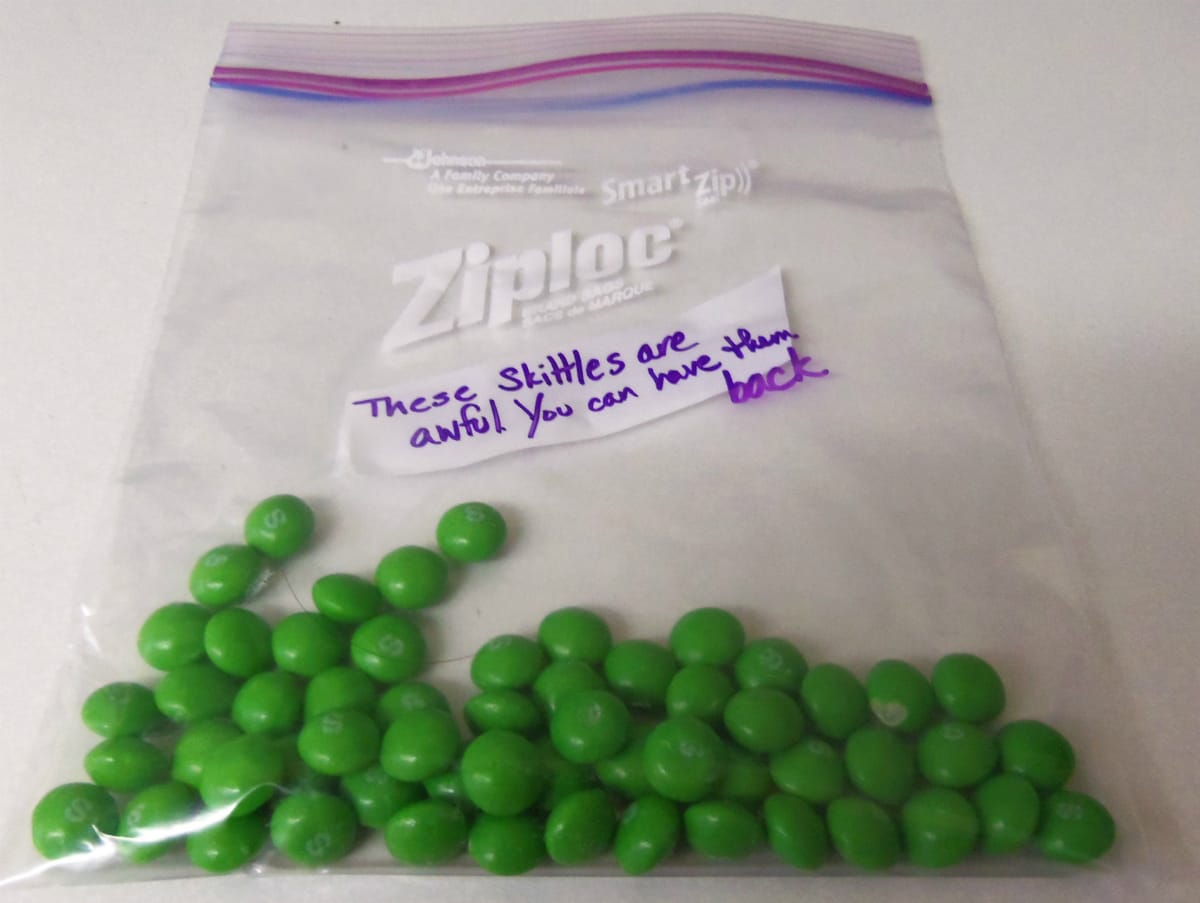 Do you remember a day when the green Skittles were lime? It was the perfect combination to the grape, lemon, orange and strawberry. Today, though, if you grab a random handful from a candy dish, you’ll be stuck with a lingering taste of green apple nastiness in your mouth. And diabetes. 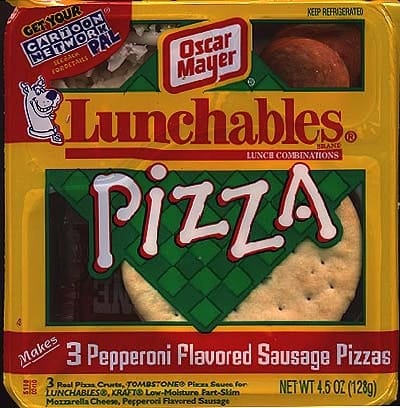 Go ahead. Go to the store and purchase some Lunchables pizza. We guarantee it won’t look like the image above. In the years since your childhood, everything’s gotten all…dinky. The pepperoni slices are about half the size they used to be, and altogether the food content in the package is about 25 percent less. How are we ever going to make Michael Schwartz jealous with that? 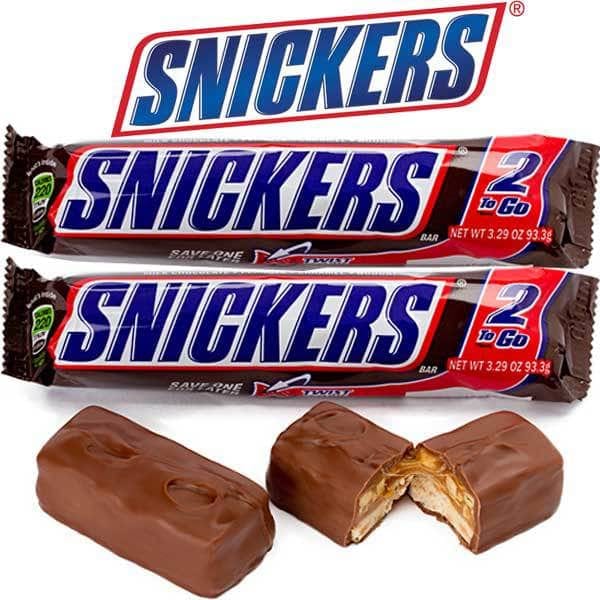 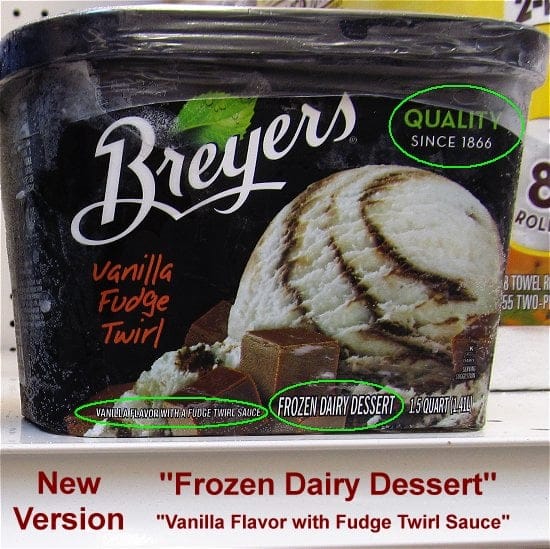 Mmm. Remember as a kid eating a warm slice of apple pie with a scoop of ice cream on top? Well, if Breyers has its way, your children will never get that experience. Nearly across the board, they’ve switched from ice cream to “frozen dairy dessert.” Why? Because they even admit on their websitethat the crap they throw on store shelves can’t legally be called “ice cream.”

America voted and, in 1995, we all expelled the tan M&M from our lives in exchange for his cooler blue cousin. I still hope sometimes that Tan will stop by in a bag, just to check in. But, alas, we cast him away, and we must learn to accept that. 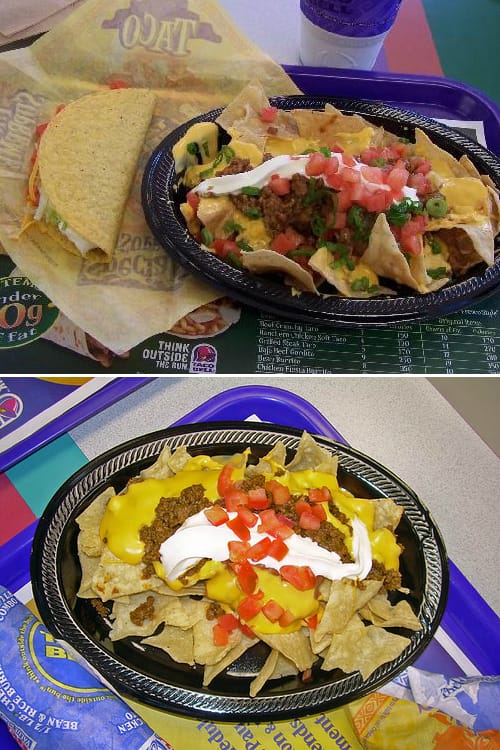 Sometimes I look at the food at Taco Bell and think to myself, “How could I have eaten that garbage multiple times a week when I was in high school?”

The answer: Because it was better then! Like, legitimately better. Take, for instance, the Nachos BellGrande. They used to have onions! And the Mexican Pizza? It used to have olives! 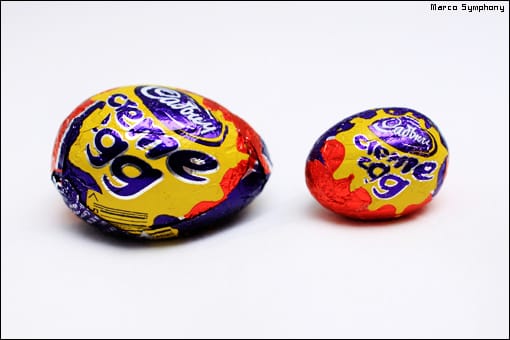 For years, Cadbury had been shrinking the size of its Creme Egg and assuming that, since it’s a seasonal product, we’d never notice. They even at one point got so smug that Cadbury lied on their own website, claiming the eggs “haven’t gotten smaller, you’ve gotten bigger.”

Sorry, Cadbury, but I won’t let this injustice stand. You know how big a Creme Egg should be? The size of an egg. Get it right or stay out of my Easter basket.

You’re not crazy. That chocolate powder in a tin used to be called Nestle Quik, not Nesquik. Also, it used to taste way better. But apparently, it’s important that our chocolate milk not have too much sugar in it, so they’ve cut the good stuff multiple times from the recipe. After all, why should a treat taste like a treat? 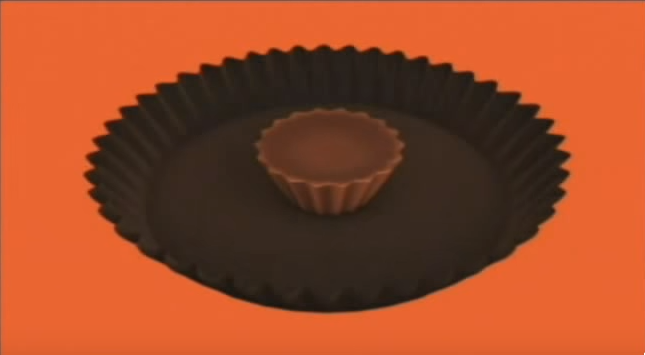 Yes, it seems that even something as perfect and cherished as a Reese’s Peanut Butter Cups can be messed with. Since you’ve been a kid, they’ve gotten smaller. And for what? Profits? 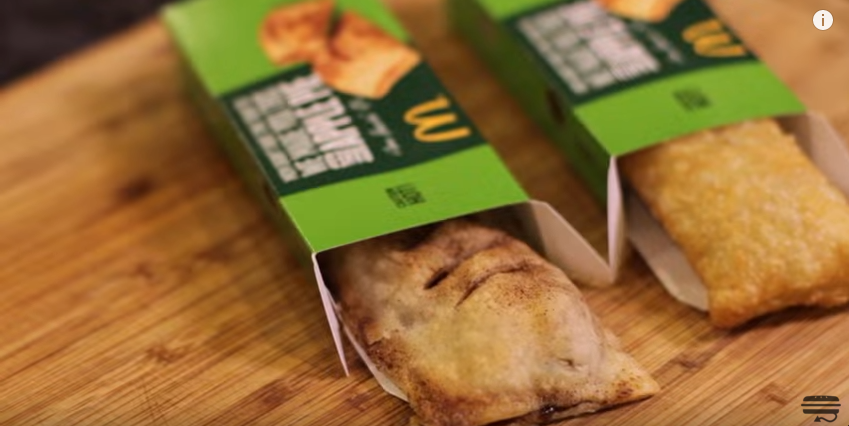 If you went to McDonald’s any time after 1992, then I’m sorry but you had an incomplete experience. That’s when the company decided to stop serving their delectably delicious deep fried apple pies in place of bland, chewy, baked apple pies.

Just in the last year, though, the Golden Arches has started to come to its senses, and you can once again find the deep fried versions in some test markets. Quick disclaimer, though: Those test markets are nowhere near where you live, because McDonald’s hates you and wants to make sure you know it. 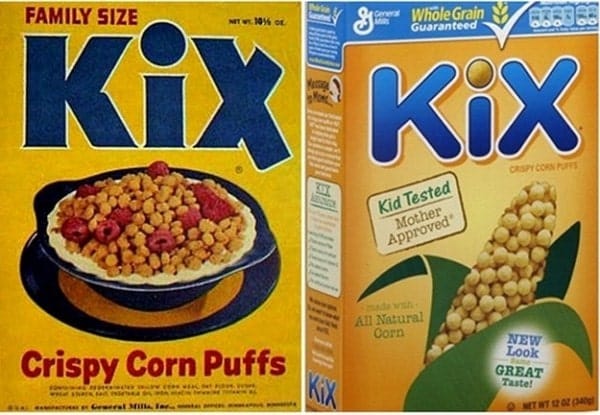 Kix has always claimed to be “Kid Tested, Mother Approved,” but we’d like to meet these kids in question. That’s because over the years the formula for Kix has become much less sweet. Also, now it’s whole grain. 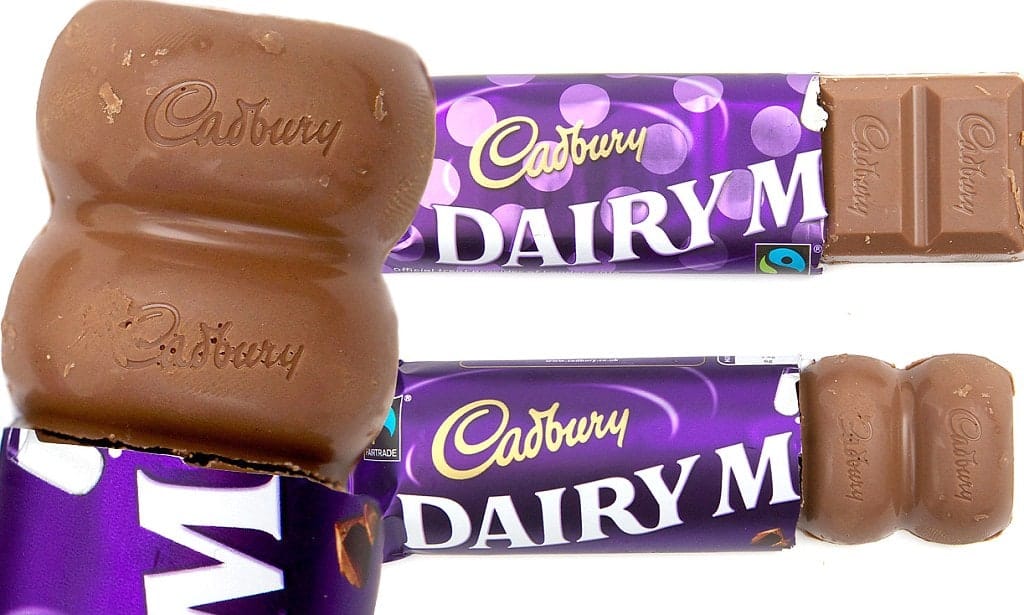 But here is where we reached critical mass, people. Cadbury Chocolateliterally cut corners in order to give us an inferior candy experience. In shaving off the hard edges, they reduced the amount of chocolate in each bar by 10 percent…though they made sure to keep the prices exactly the same. How sweet of them.