I’m not sure if I’m not part of  the right generation or what, but I have to vehemently disagree with a lot of the items on this list from Guff.com.  These are great snacks!   Who among us has never squirted a can of cheese on a cracker and savored the delicate flavor? And speaking of cheese, since when is American Cheese not cheese?  It says cheese right on the package.  In fact, cheese is the first ingredient.   And why can’t we have American Cheese if Swiss Cheese isn’t actually manufactured in Switzerland?   And if you’re going to make fun of Fig Newtons for not being a cookie, let me introduce you to the fortune cookie, which is an insult to cookies everywhere.   I also double dare you not to eat those mandarin oranges on your salad.  They are freaking delicious.

Okay, I’ll give you Uncrustables, which I tried once and should really have been called Uneatables.   And I don’t think anyone actually liked bologna, especially because it’s pronounced “Bo-Lodge-Na” and not “baloney.”  That’s a bunch of bologna if you ask me.   You only selected the bologna for your sandwich if you were out of salami, roast beef, ham, turkey, and the other 17 luncheon meats that were more desirable.

So screw you, writer of this list.  I’m going to my cupboard right now and grab some Kraft Cheez N Crackers and I’m going to wash it down with a can of Spaghetti-O’s, because I’m a lazy American and it’s my right to have canned pasta available. 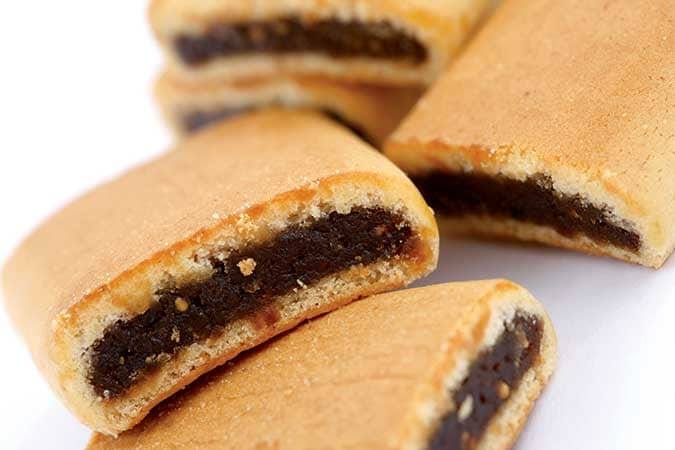 Fig Newtons aren’t that bad. The problem was how they were marketed to us. They’re about the furthest thing from a cookie that there has ever been, and they besmirched the good name of cookies for a while there. “Cookie” my foot. 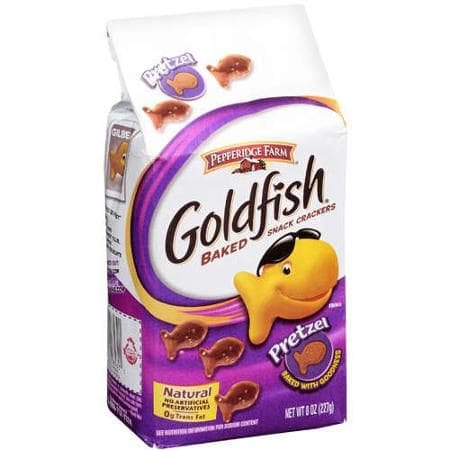 When you were promised Goldfish, your heart leaped for the crispy, cheesy goodness only tiny, aquatic animals could provide. But when you were handed a purple bag, it was like your life flashed before your eyes. PRETZELS?! What is this, North Korea?! With the promise of cheddar cheesy delight gone, there was only one thing to do: Place a pretzel goldfish on your desk and smash it to bits with your fist. 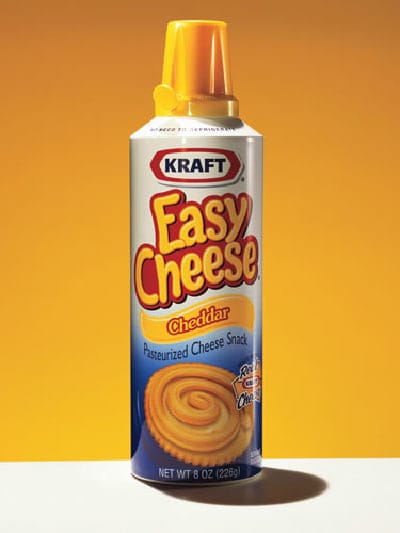 Cheese was not made to come out of a can. There, I said it. Come at me. 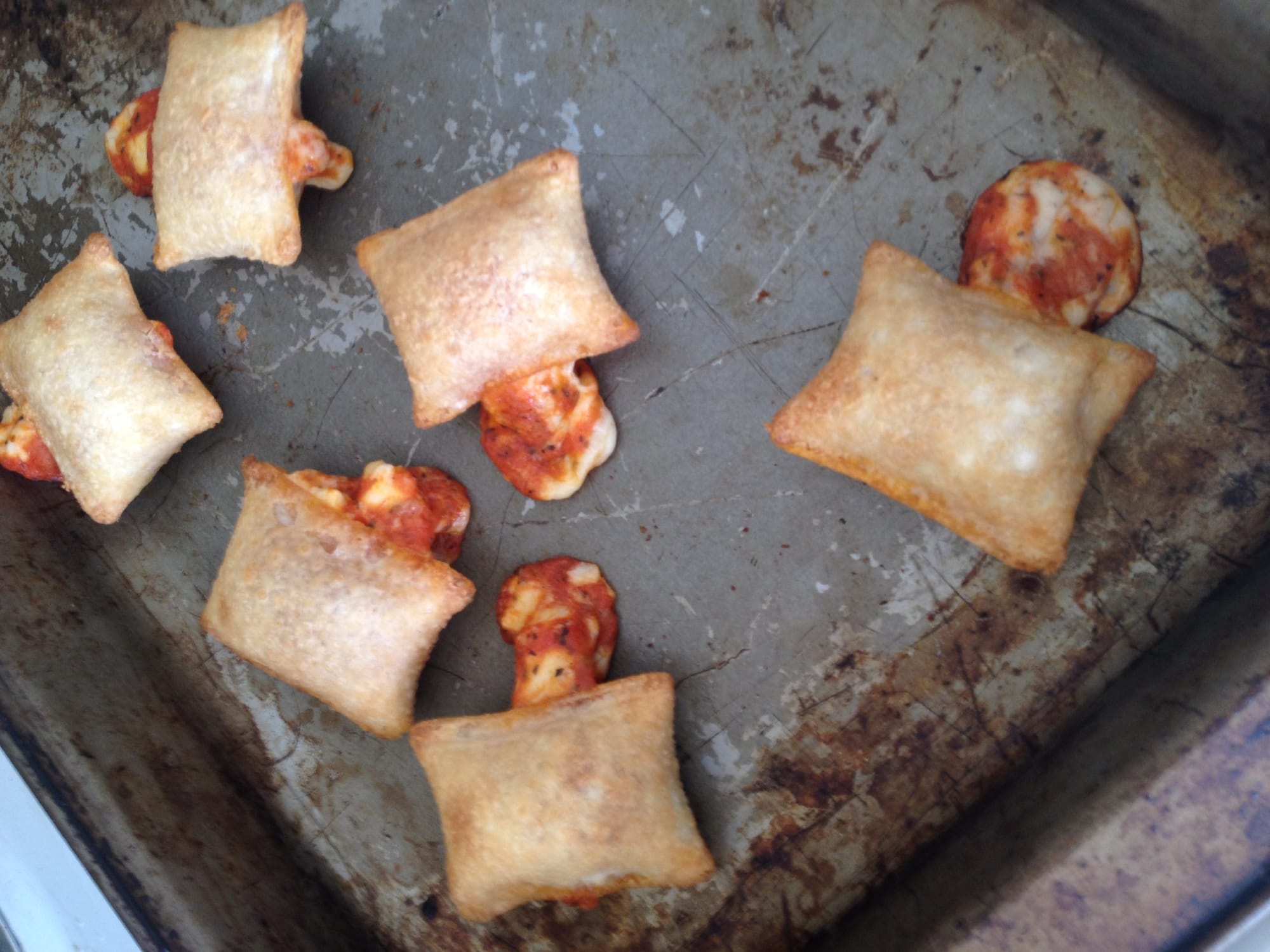 Totino’s Pizza Rolls were extra terrible because they got your hopes so gosh darn high. But instead of the perfect, little pizza pockets of your imagination, the oven eviscerated them, leaving them BURNING HOT but bleeding out all their cheesy, saucy filling. RIP Totino’s Pizza Rolls, every time. 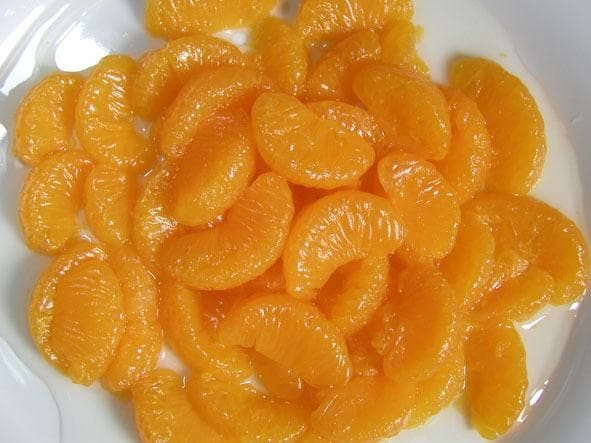 Even at the time, we knew this was only sort of fruit. More like way-too-sweet solid juice pillows, mandarin oranges always still populated the corner section of your styrofoam lunch tray when you flipped it into the trash. 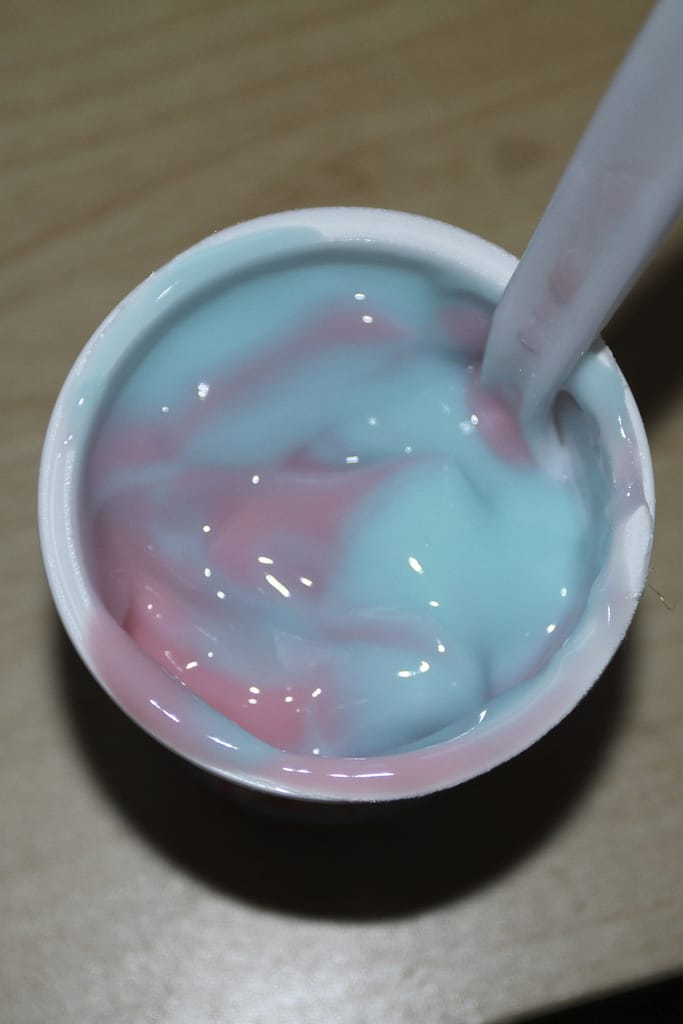 Most Trix Yogurt had flavors like Strawberry Banana or Raspberry, but it strayed from acceptable fruit varieties with the deplorable Cotton Candy flavor. Not only did it smell and taste terrible, but that pink and blue never failed to mix together into what can only be described as poop brown. Mmmmm. 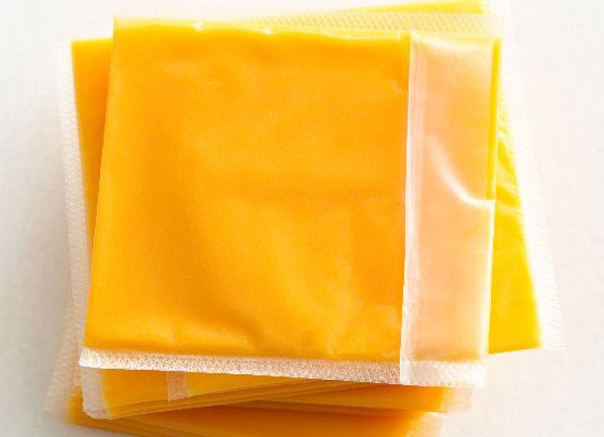 Remember the good ol’ days of unwrapping a Kraft single, folding it on itself several times, forming a cheese stack of impressive size, and biting into it like it was a chocolate truffle? Thinking about it makes me gag. American cheese is not cheese. But as kids, we just accepted that it was. The only place it’s tolerable these days is melted on a grilled cheese sandwich, and even then, most of us have graduated to cheddar. 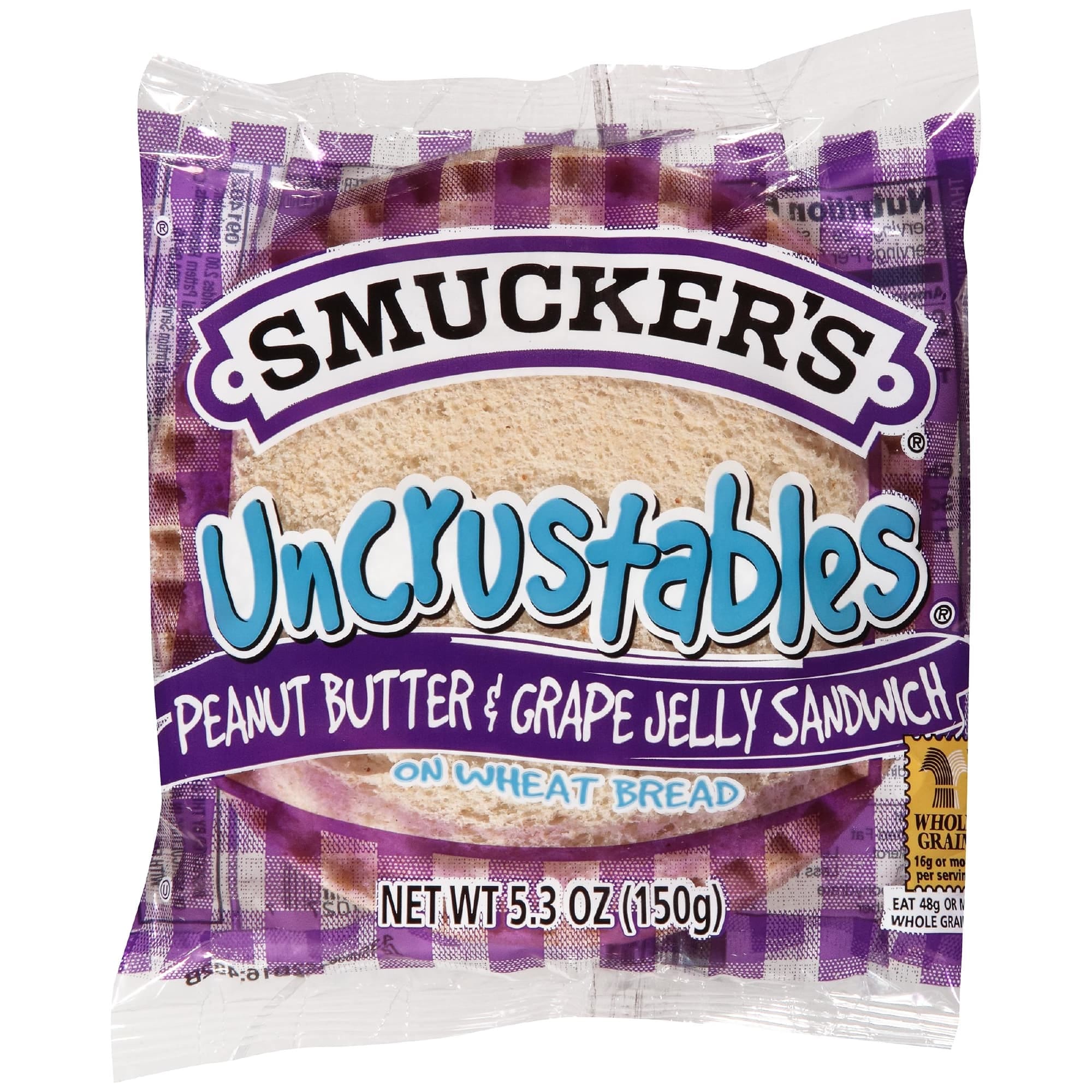 Smucker’s Uncrustables were great if you loved choking on peanut butter and getting way too much grape jelly squirted into your mouth at the same time. The bread was way too soft and punched down into some sort of a white bread pancake—the ratios were all wrong. Make your own sandwich, for Pete’s sake. #CrustAllTheWay 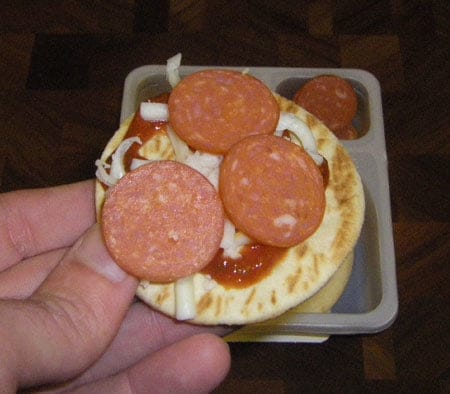 Lunchables Pizza was responsible for schooling an entire generation of children in the art of dealing with disappointment. At least it was good for that. There were never enough ingredients to make every pizza sufficiently pizza-like, and the “crusts” were soggy crackers. We tried so hard to experience the best Lunchables Pizza had to offer, but in the end, it was never enough. 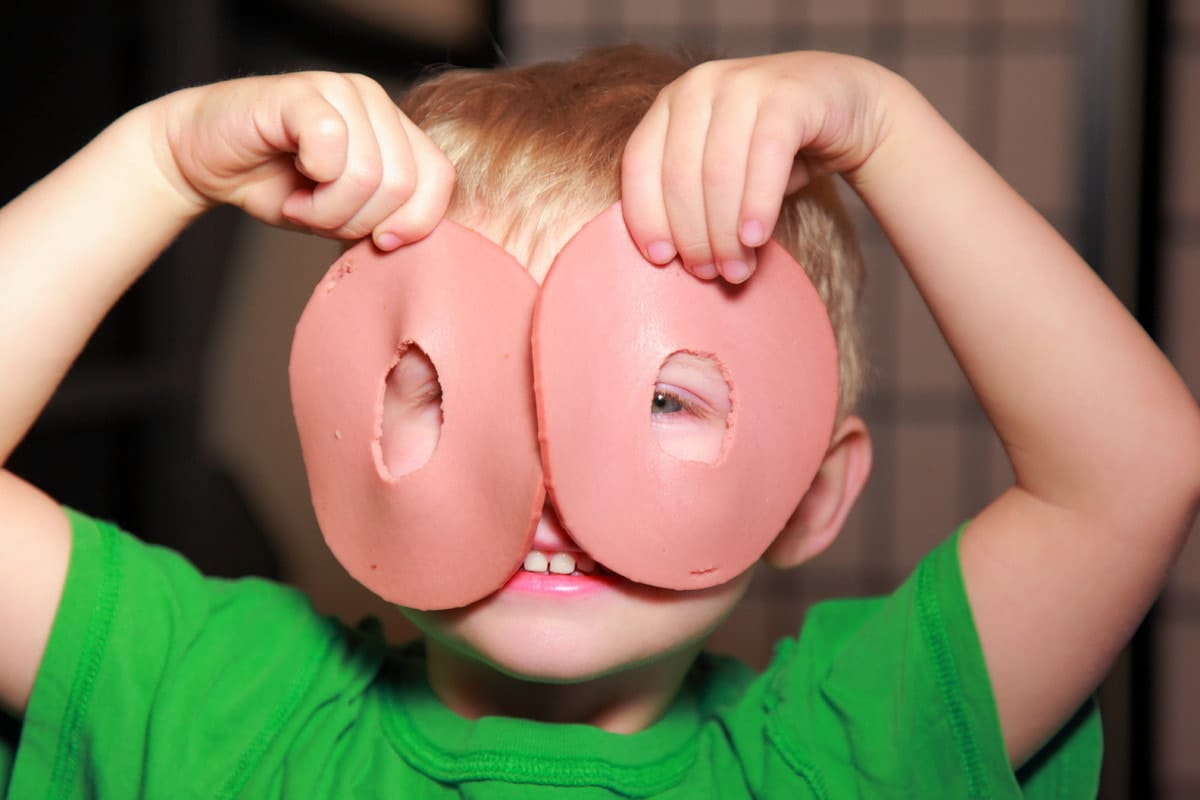 If you liked bolonga as a kid, you were one of the weird ones. Sorry, that’s the truth. It was the definition of mystery meat and was always just a little too close to the consistency of Jello for our liking. 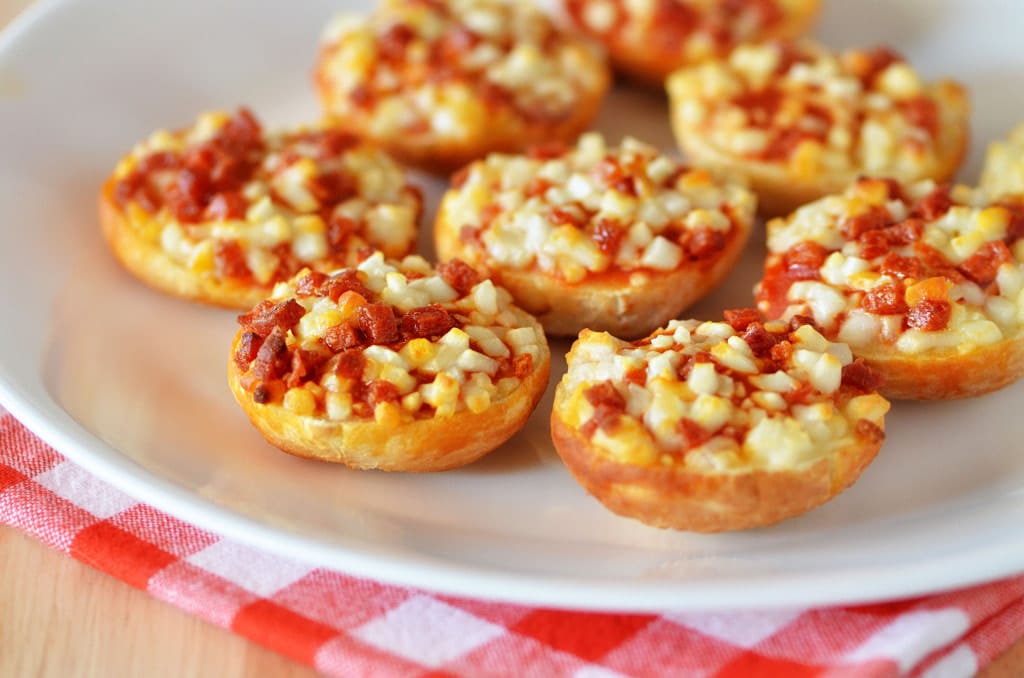 Bagel Bites were correct: When pizza’s on a bagel, you can, in fact, eat pizza anytime. However, you should probably wait a few minutes after taking them out of the toaster oven, since they will burn the roof of your mouth 100 percent of the time yet somehow remain 100 percent frozen on the inside. 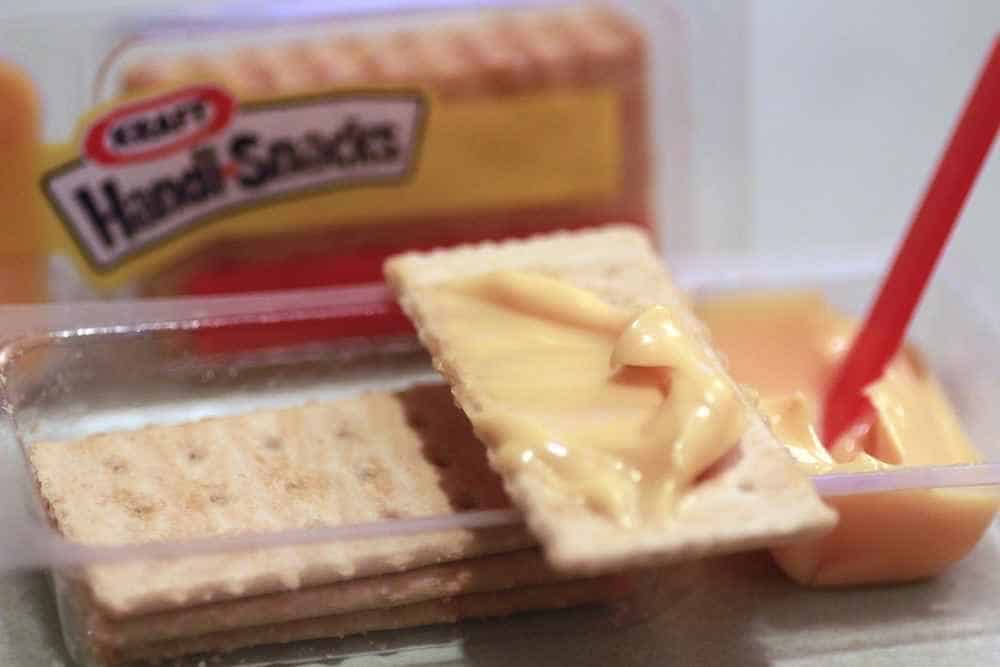 Sure, we loved them. But we knew, even at the time, that the “spreadable cheese” was really “chemical mush.” They weren’t fooling anyone.

If yogurt was lacking anything, it was the ability to squirt it straight into your mouth via plastic tube, right? WRONG. Go-Gurt is responsible for so many yogurt-in-hair incidents it should be outlawed. 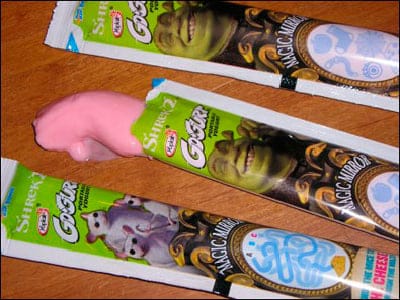 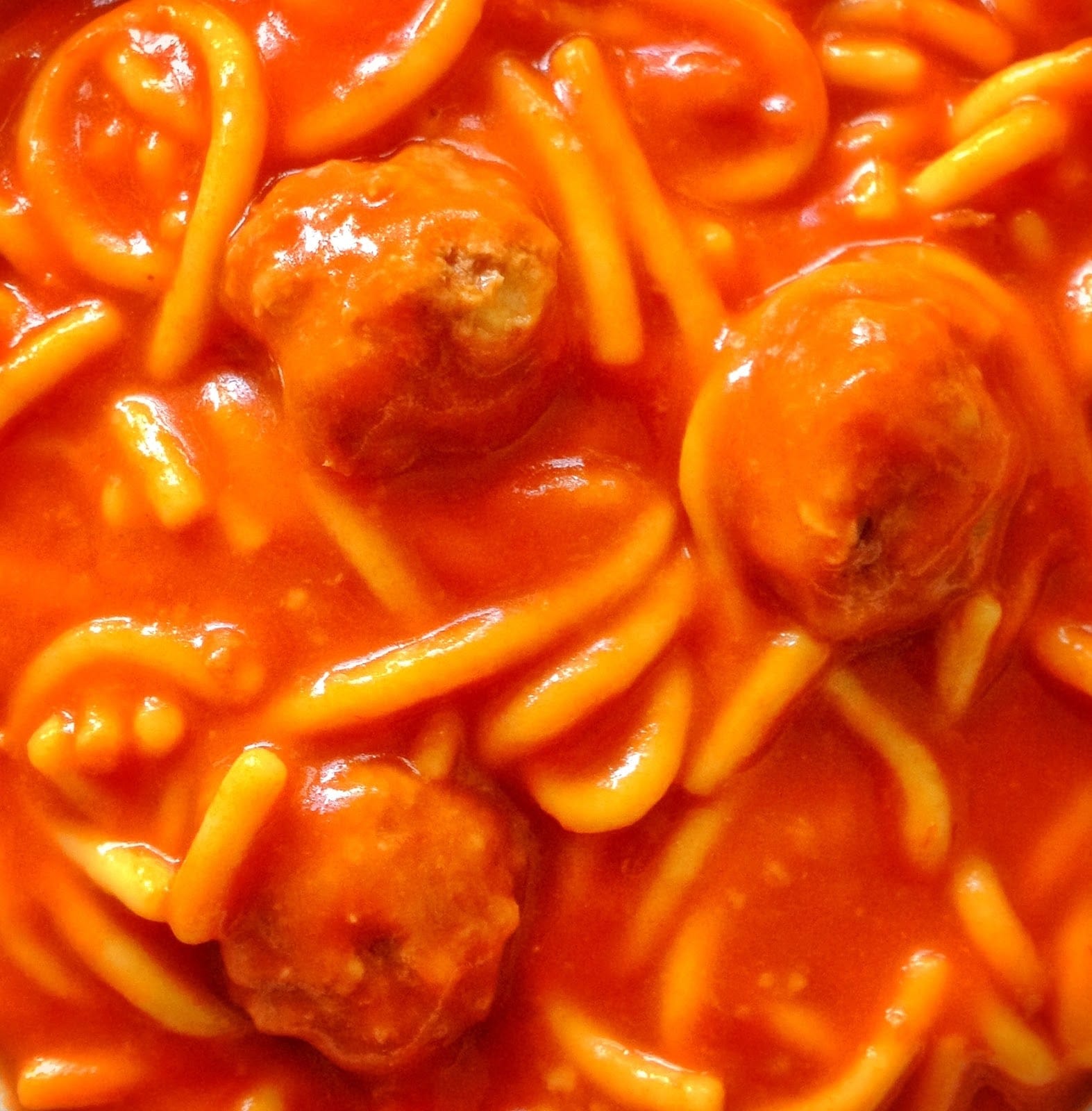 We inhaled SpaghettiOs. We yearned for Chef Boyardee. But in the end, we still knew what it was: canned pasta. That fact doesn’t get any less gross with time. At once slimy and melt-in-your-mouth soft, we loved canned pasta purely because it tasted fake. Oh, we were aware how nasty it was. It just didn’t upset our ten-year-old iron stomachs yet, so we ate it with a vengeance. 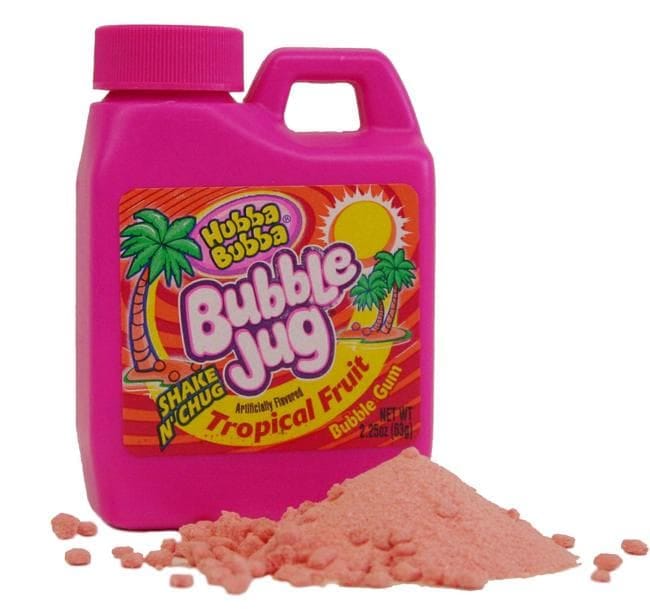 It was a science experiment gone horribly wrong. The Bubble Jug was full of some sort of gum dust, which, when you poured it into your mouth, congealed into actual gum. Maybe they thought this was “fun” or something, but they were sorely mistaken. Unforgivable.