Some things change, and others remain constant.  For a long time.  So when they change, it’s big news.

For the first time in 15 years, In-N-Out has changed their menu.  Can  you name another major chain who can has kept their menu the same for so long?  I’d say exactly zero.   They have remained faithful to their roots and have continued to do one thing well–make a great burger.  No chicken sandwiches, no tacos, no pumpkin or peppermint latte drinks, and no chicken tenders.

So what’s the big change?  They are now serving HOT COCOA.  Try and control yourself.  You can even ask for marshmallows on the side!!  Have they gone crazy?   Now you may say, “But it’s warm in California, who would drink hot cocoa there?”   But if you’re not from California, let me tell you that it does get bone-chilling cold here, in fact it’s gotten down into the FIFTIES the last few nights.  Us Californians need something to warm us up so we don’t get frostbite, you know?

Technically this isn’t a new menu item since they actually served hot cocoa in the 50’s but it fell off the menu and now they’ve brought it back.   So kudos for having the guts to change something that’s been great for 15 years (if it ain’t broke, don’t fix it!) but let’s stop there and not get carried away, In-N-Out.  If you start adding smoothies or fancy coffee drinks, there’s going to be hell to pay. 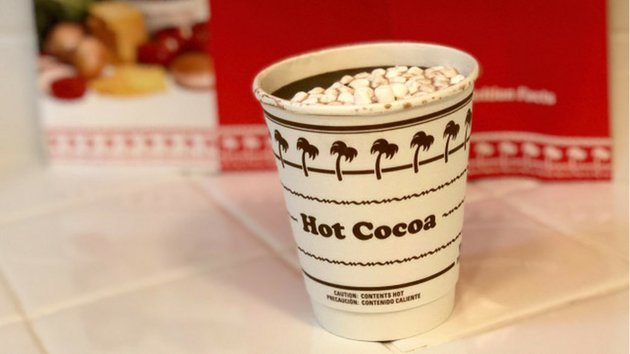